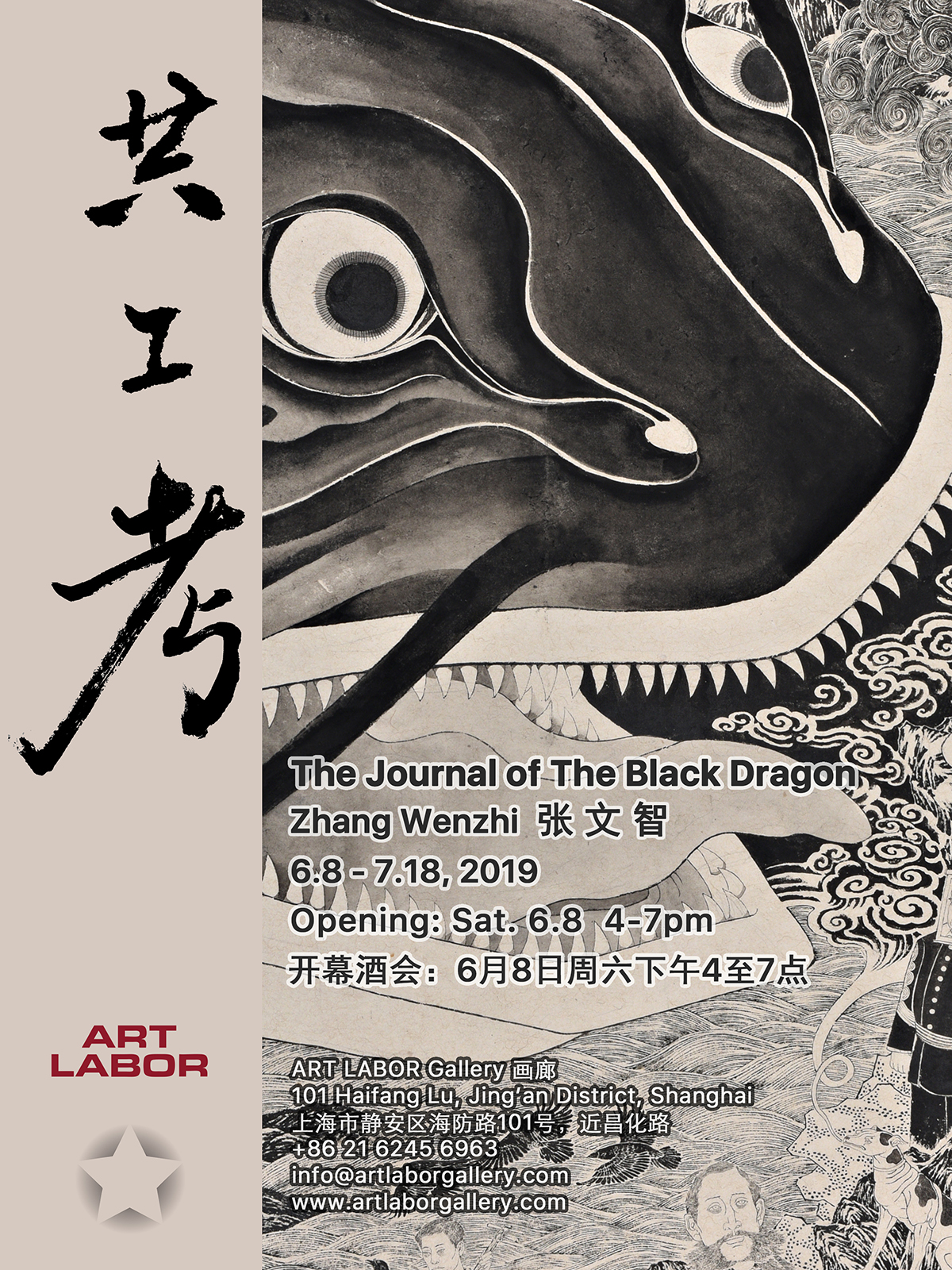 ART LABOR is pleased to announce its upcoming solo exhibition “The Journal of The Black Dragon” by emerging Chinese artist Zhang Wenzhi. Recently graduated from the Central Academy of Fine Arts (CAFA) in Beijing with an MFA degree last year, this is his debut solo exhibition.

The exhibition will be held from June 8th to July 18th, 2019. The opening reception is on Saturday June 8th from 4 to 7pm.

Zhang Wenzhi’s artistic practice is largely inspired by historical research, mythology and local folklores from his hometown Dalian and the surrounding areas in Northeast China. This exhibition was born as an experiment and imagining of “The God of Thunder”, which can morph into several different forms, and one of them is Gong Gong (共工), the black dragon.

Using the history of the Kwantung[1] Leased Territory as a background (actual historical events) the artist adds on his vivid imagination to thread the narrative. A portrait of the Japanese emperor, an enormous fish head skull, and a shark morphed into a tiger… bits and pieces of information being linked together develop into a fantastical epic about this former colonial territory. The Black Dragon turns into a gigantic catfish – an omen that history was taking a mystical turn. The assassination of Itō Hirobumi, the collapse of Nikolai II’s regime, the Great Kantō earthquake (1923), and the sudden death of Inoue Enryō, all these incidents symbolize the clues that the black dragon left behind.

The exhibition serves as a stage for this historical drama. The artist has attempted to search out the black dragon myth, and in doing so reveals the competition for power among the countries, which reflected the special geographical features of the Liaodong Peninsula, as well as imagined alternative destinies for the historical figures. This group of art works are a re-invention of many stories that happened during the Japanese occupation of Dalian, a journal filled with bizarre and quotidian tales, interwoven with local history.

Zhang Wenzhi was considered one of the top graduates from the CAFA class of 2018, and is a highly talented ink painter, an avid researcher of Late Qing Dynasty and early Republic history, and a collector of old documents, artifacts and specimens, and has amassed a fascinating exhibition consisting of ink on paper works, as well as sculpture and installation. This exhibition will explore and explain a realm of history, myth, and imagination.

————————————-
[1]Kwantung Leased Territory (关东州) was a Russian-leased territory (1898–1905), then a Japanese-leased and then invaded territory (1905–1945) in the southern part of the Liaodong Peninsula (Japanese: 遼東半島) in the Qing Empire and later the Republic of China which existed from 1898 to 1945. It was one of the territorial concessions that the Chinese government under the Qing Dynasty was compelled to offer to foreign countries during the second half of the 19th century. The territory included the militarily and economically significant ports of Lüshunkou (Port Arthur, Port-Artur in Russian, or Ryojun in Japanese) and Dalian (Dalny, Dal’nii in Russian, or Dairen in Japanese)

Sketch of Dalny No.1
Zhang Wenzhi

Sketch of Dalny No.2
Zhang Wenzhi

Dance of Tao Tang and Songs of Ge Tian 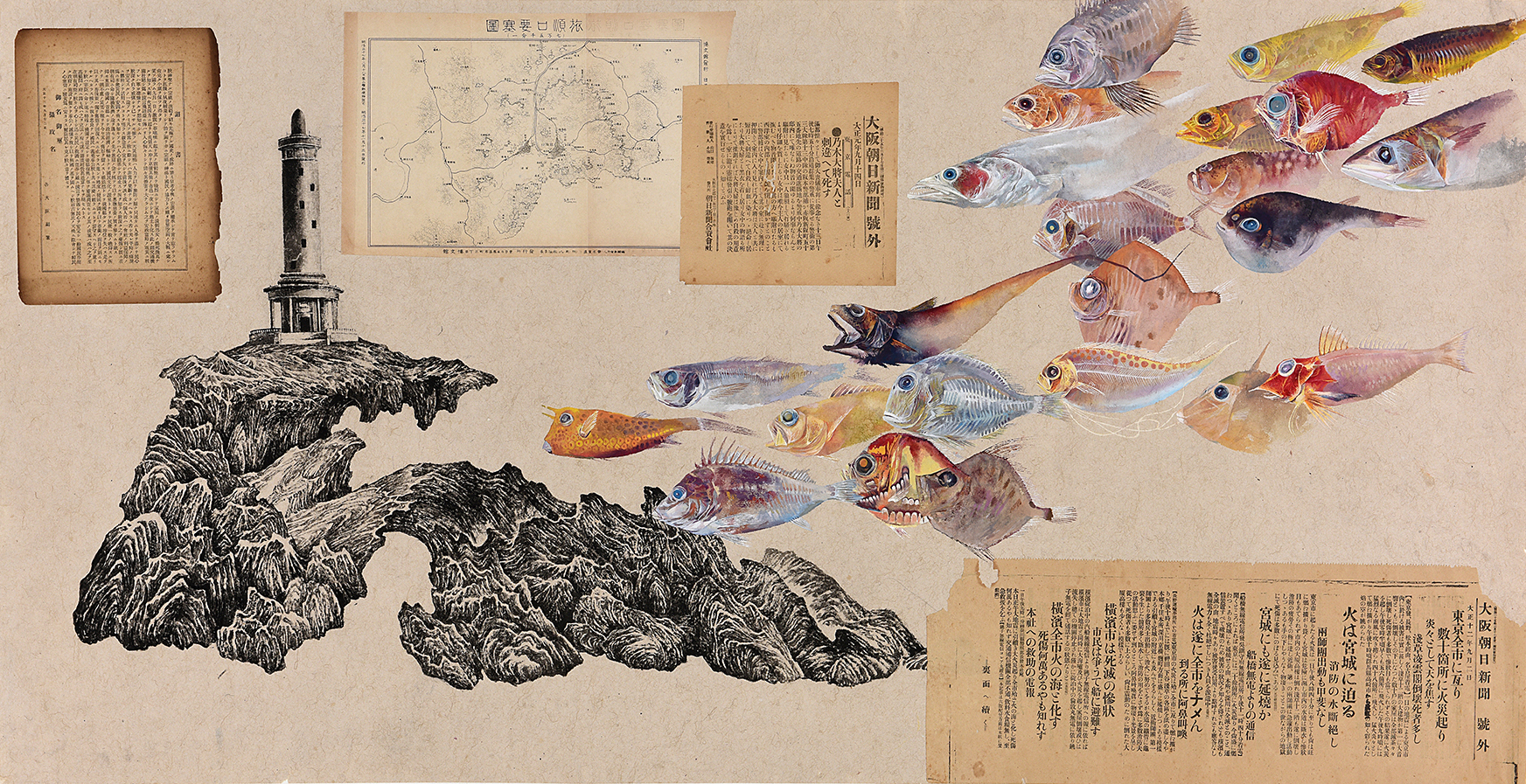 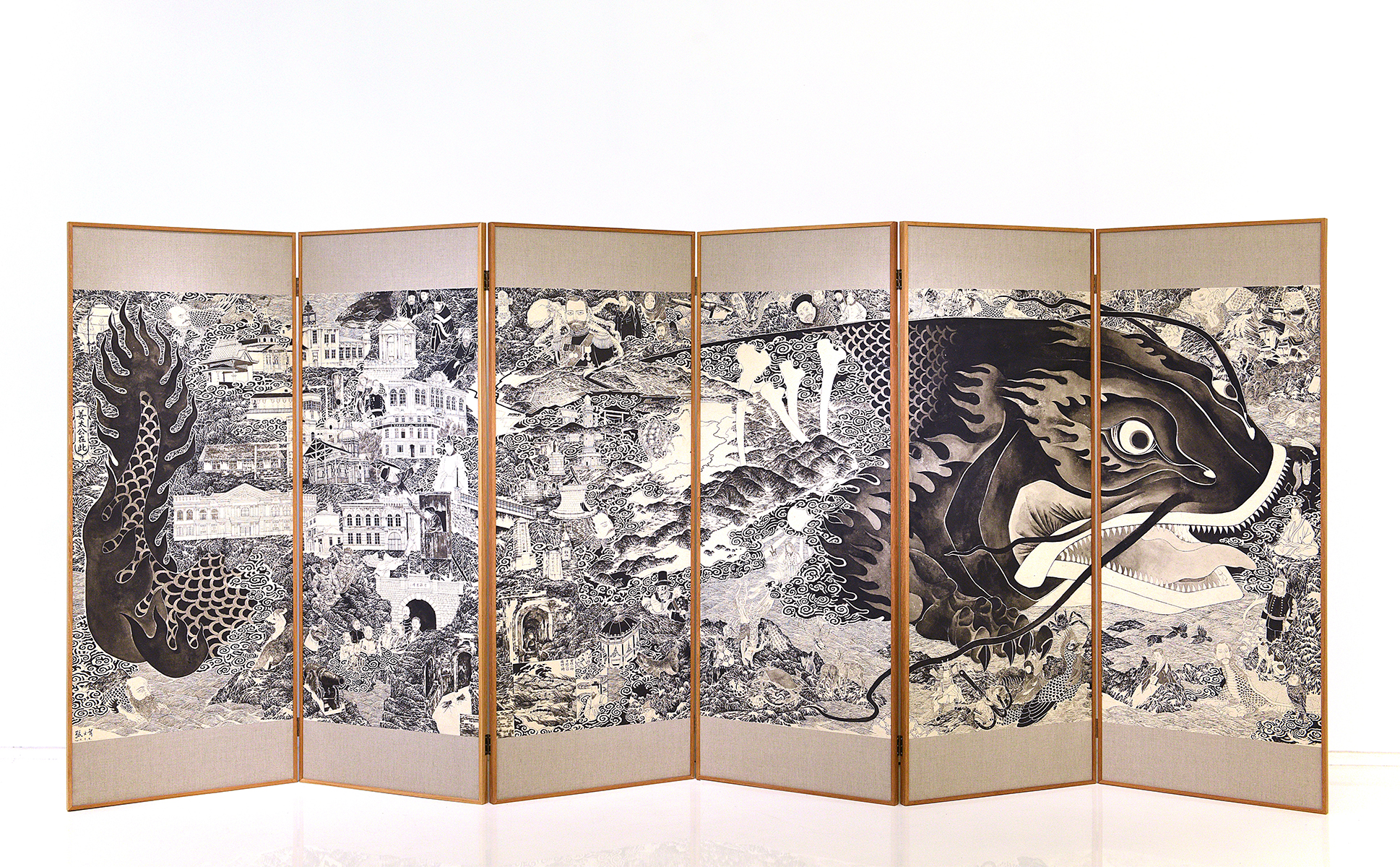 The Journal of The Black Dragon
Zhang Wenzhi